GT Briefing May 2014: Preparing for a new generation of learners and workers

GT Briefing April 2014: A new world of hubonomics and smart megacities
04 April 2014
Preview of The Global Trends Fieldbook: The Tech Visionaries Reinventing the World
06 May 2014
2nd May 2014 by Christel K. Stoklund in Monthly Briefings

NEW: Also see the slideshow presentation of Preparing for a new generation of learners and workers

May 2014: Education is a basic need. Economic and social development depends on it; the ability for individuals to reach their full potential depends on it; business success depends on it. However while governments, businesses, non-governmental and other private institutions play a tremendous role in educating our current and future workforce, educational institutions remain the cornerstone of knowledge and innovation.

Globally education systems aim to prepare young (and not so young) people to be successful and productive members of society, providing people with the appropriate knowledge and skills to enable them to do well in life and to support societal progress. Yet there is increasing criticism of many education systems and institutions across the globe, as youth unemployment reaches critical levels in many countries and businesses protest that the next generations entering the workforce do not have the right skills. In fact, some leaders suggest that whole swathes of young people are unemployable because education systems around the world fail to invest in up-to-date education and their students.

The new generation of learners is adigital generation thriving on flexibility, mobility and immediacy. Their digital attitudes and behaviors are permeating every facet of life and work, embracing the virtual, living in real time. They are coexisting with, if not thriving on, social networking, the cloud, and cyberspace demands that are often seen as overwhelming and beyond the “normal” human capacities of many in older generations. The mindset of younger generations is challenging our society’s conventional and stationary learning patterns meaning that the education system needs to focus on new, more flexible and mobile ways of learning to motivate and engage these new learners.

The good news is that disruptive forces are already changing the landscape of education as traditional face-to-face learning moves towards virtual and interactive learning, However, educational institutions – whether primary, secondary or tertiary – need to step out of their comfort zones to reflect an increasingly complex world. Constantly developing technology, the mindsets of the new digital natives and future skills challenges demand radical shifts both in educational content and delivery.

So what will it take to reshape the education “industry” and prepare our educational systems and institutions for the future – in fact, who should the educators be?

Rethinking education for a new generation of learners

It is just a matter of time before education, as we know it changes from its traditional form to better connect, engage, enrich and motivate all generations of learners from kindergarten, to high school, to higher education and workplaces. Around the world new types of educational systems are being introduced incorporating more technology, visual and interactive learning methods. However before we get too excited, it should be noted that even though the technology is here, change is far from everywhere and not always happening at the pace that some might wish. The mammoth cost of digitizing every traditional primary, secondary and tertiary educational institution is one barrier; another is shifting the mindsets and skills of millions of teachers, professors and human resource professionals. Nonetheless, some educational institutions have come a long way. New approaches to learning, most enabled by technology, include: 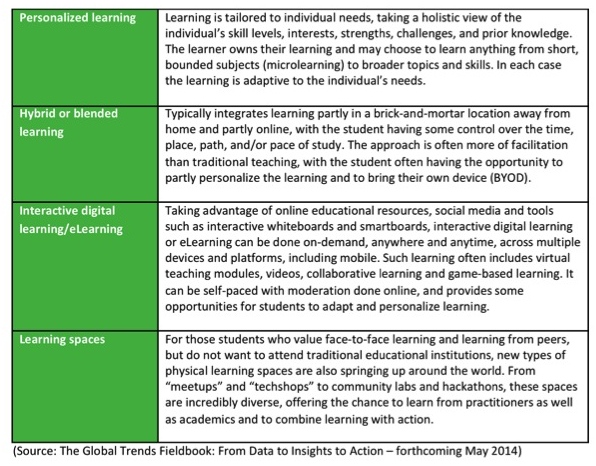 Preparing the new generations for the jobs of tomorrow

Educating the future workforce as well as developing the skills that the current workforce will need in future is an enormous task and one that requires more than changes in educational institutions. The question is who should be responsible for doing so. As in many sectors and markets, one organization is unlikely to be able to deliver the full solution alone. This means that in addition to academia and educational institutions themselves, there are a range of other organizations that need to rethink their roles in developing the skills of the future, including governments, NGOs, businesses and other private institutions. Increasingly they are doing so, often in partnership and with a range of business models, as the examples below suggest:

How will you and your organization take on the challenge of education?

The future of the “education industry”

Knowledge and access to information is being democratized and just as digital technologies have transformed publishing, media, retail and many other industries, they are now catching up with the educational system. The future learning environments will be increasingly intelligent, connected, personalized and available in real-time. Content will be found in abundance, as the internet becomes our external brain. The need for traditional memorizing of information declines while creativity and agile thinking as well as social and collaboration skills become increasingly important. Instead of traditional learning, “educating with a purpose anytime, anywhere” could be the new motto of the “education industry.”

The table below reflects the major paradigm shifts that education has experienced during the last century. It also, unfortunately, represents the immense abyss between the needs of today’s learners and what is actually being delivered to them by most education systems. 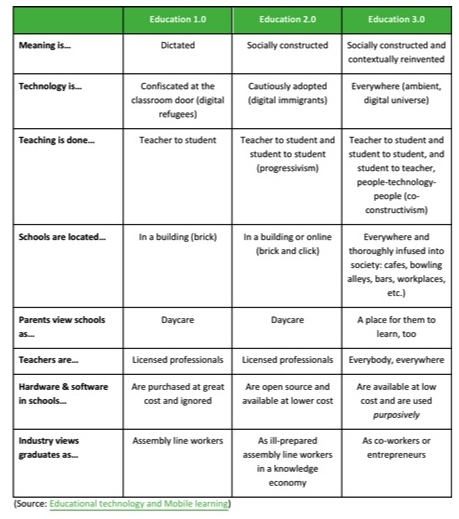 While the education industry is well under way reinventing itself, it is still to be determined what form it will take and who will be the key players. Let’s have a look at some of the trends:

Integration of big data into the learning space: A partnership between Knewton and Cambridge University Press is developing a new generation of digital products by integrating the Knewton API with the innovative Cambridge LMS platform, which currently serves over 250,000 students and teachers globally. This will enable Cambridge to incorporate recommendations and analytics into both self-paced and instructor-led blended learning materials to help educators monitor student performance in real-time. (Source: Knewton)

Connected learning:The Wharton School of the University of Pennsylvania and Cisco are developing the learning experience of the future – one that blends life-size visual communication via telepresence with collaboration technologies that significantly enhance the way faculty, students and alumni interact and learn, no matter how distant they may be from physical classrooms. (Source: Wharton News)

Breaking down the barriers in the “education industry”: Disruptive forces and new players, from high-tech manufacturers to IT start-ups and social entrepreneurs, will in the future attempt to find and fill gaps in educational provision. While some people question their legitimacy as educational providers, other believe that these new players can bring the much needed change into the educational industry. To be a winner in the future “educational industry revolution” it is critical to focus on the right emerging technologies. Michell Zappa at Envisioningtech has visualized a series of emerging technologies that are likely to influence education in the upcoming decades. Check them out here.

A vision for the future of learning in real-time: Pearson’s Research & Innovation Network is sharing their vision of education in the future. The series called “Schools of Thoughts – A vision for the future of learning” demonstrates three stories of education at various levels. Rey’s story is about a high school student using games and simulations for learning. Victoria’s story is about how a middle school student experiences education through the support of human and automated interventions. Simone’s story is about an adult learner using technology to direct her own learning path. Her learning is complete with augmented reality, learning that can happen anywhere and anytime, and a massive online course. Click here to watch the videos. Another vision for future learning is the officially chosen White House Student Film Festival video for 2014: Technology in Education: A Future Classroom for the 2014.

In June: Look out for trends in action on The Purpose Economy