Migrant labour in Asia: Personal sacrifice for the common good

The race for the Arctic is on but let’s not forget the people who call it home
04 March 2014
GT Briefing April 2014: A new world of hubonomics and smart megacities
04 April 2014
5th March 2014 by Malin Samuelsson in Blog

It happened again. A domestic helper in our neighborhood here in Singapore, an Indonesian woman, asked the helper next door for food and clothes. Your occasional correspondent is trying to imagine her desperation. This woman lives and works in a house that’s worth well over a million US dollars, but she is neither fed nor clothed. I will not dwell on the personal characteristics of people who treat other human beings this way, but I will dwell on the phenomenon of migrant labor, and the winners and losers of this global trend. Because she is a case in point – migrant labor is on the up, and an increasing proportion of them are women.

Anyone who takes up some kind of paid employment outside their home country is considered a migrant worker, including well-off ‘expats.’ However, the topic here is migrant workers from developing countries, those who cross a national border in search of a better life, for themselves and for their families back home.

South-East Asia is home to over 10 million migrant workers, and in Singapore this part of the population is steadily increasing. In June 2013, 211,000 foreign domestic helpers and 306,000 construction workers were legally employed in Singapore. Native Singaporeans have an ambivalent appreciation of foreign workers – they want their labor to build their houses (mainly South Asian men) and then cook and clean inside them once they are built (mainly South-East Asian women), but they don’t want their tiny country to be overcrowded.

Government-controlled media clearly has social harmony on the agenda, but stories of maltreatment of foreign workers are abundant in the blogosphere and on the grapevine. The government has institutions that deal with abuse of foreign workers, including a ‘hotline’ for the public. (I am personally not convinced that it’s a ‘hot’ line as you have to go through at least four sets of option menus on the phone before you get to speak to a real person.) In order to hire a domestic helper, the employer-to-be has to pass a test to prove that they know how to treat the new member of the household, including the fact that she needs a certain minimum amount of food, has the right to a day off, and that you should ask nicely (not scream at her) when you ask her to cook Chicken Rice for dinner. It’s multiple-choice questions, so failing the test is nearly impossible, but failing at the implementation stage is obviously more common among employers. 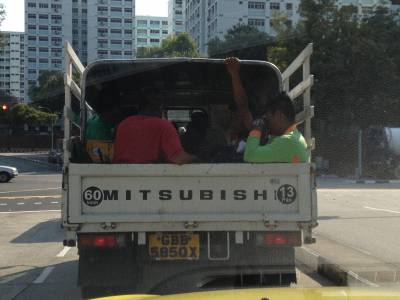 The demographic and economic differences in the region are driving the migration trend; surplus workers from low-income countries with higher fertility rates migrate to jobs in higher-income economies with lower increases in population. Despite the brain drain, which is an obvious negative for the sending country, there is mounting evidence that this migration can have positive influences on all sides. In particular, women migrants have an important role to play: not only do they send home a larger proportion of their earnings than men, but according to the World Bank, they also spend more money on food, education and health care. And more women are migrating now than ever before. Around half of the international migrant population is made up of women, and in some countries their proportion is as high as 80 percent. Even though women often end up in low-paying, unskilled jobs, and are much more vulnerable to exploitation and trafficking than migrant men, many of them do return home and are able to create a better future for themselves and their families. Many also end up investing in property and small businesses, which lends them social status and power over their family’s fate. In addition as spouses of migrant men, women become the heads of their household with access to funds from abroad, which increases their social standing.

The general tendency today in Singapore is to restrict immigration by forcing companies to advertise jobs on the Singaporean market first, and increase the cost of work permits for foreign workers. (Our neighbor Malaysia also started a major deportation effort in January of hundreds of thousands of illegal migrant workers, who are seen as the cause many social problems in the country.) There is antagonism between migrants and natives, as was evident in the Little India riot last December, and the government has since put severe measures in place to prevent it from happening again, including giving the police ‘fine-tuned powers’ and deporting many of the migrant workers involved. (This incident, considered the second largest riot in the history of Singapore since independence, was prompted by the death of an Indian foreign worker being hit by a bus driven by a Singaporean driver.)

An argument often used to defend the continued use of foreign workers in Singapore’s economy is that it will maintain economic growth. Those who are on the other side argue that with a reduced reliance on foreign workers, economic growth may well slow down, but what is left of it will be in Singaporean hands and will lead to increased domestic consumption, less congestion and cheaper housing in the long term. Some even believe it might lead to a higher domestic birthrate – a major concern in the years to come as the country faces a low birth rate and an older population. This is also true for other developed countries in the region with a lopsided population pyramid. Take Japan for example, where there is serious experimentation in using robots to care for their elderly, rather than allowing for immigration of workers to do this arguably ‘human’ job. Japan’s birth rate is well below replacement rate at around 1.4 children per woman. Reasons for this include economic uncertainty and declining salaries, making Japanese couples reluctant to get married and have children. Immigration could potentially provide a boost to economic development and, if others care for their children, Japanese women could stay in their careers. Something needs to be done as currently a quarter of the population is over 65, and by 2050 workers will account for only half of Japan’s population, and 40 percent of the population will be 65 years or older. The Japanese government has recognized the positive role immigration could play, and in January decided to make it easier for some industries to hire foreign workers, e.g. in construction and child care. It will be interesting to see whether this will lead to an increase in labor immigration to Japan. 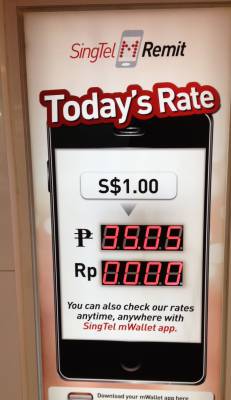 For the migrants’ home countries, the outflow of workers gives a steady influx of cash. Global remittance flows to developing countries exceeded US$400 billion in 2012, increased to US$414 billion in 2013, and are projected to reach a whopping US$540 billion by 2016. India, China and the Philippines topped the list of remittance-recipient countries (taking home US$69, 60, and 24 billion respectively) in 2012. Overall, remittance flows have quadrupled since 2000 and the trend is maintaining pace. In some developing countries, the income from remittances exceeds the incoming capital from both FDI (foreign direct investment) and development assistance (foreign aid). This is a good thing according to a recent study, which found that remittances are almost as important as FDI, and even more important than development assistance, for generating economic growth. (Development assistance will in some cases even hamper growth according to the same study!)

The bottom line is that the sending countries may suffer some brain drain but receive remittances and returnees who invest in their home country, and the recipient countries get cheap labor in their productive years without having to educate or care for them when they are too young or too old to work. So as long as there are richer countries and poorer countries, labor migration is bound to continue. If workers are treated with respect, have a decent standard of living and receive adequate remuneration, it can be a win-win situation – unlike in the case of the unfortunate woman in my neighborhood.

World Bank report on the impact of remittances on sending countries