Burma part 1: THE LONG ROAD AHEAD – CHALLENGES TO EMERGING REFORMS IN BURMA

The alluring illusion of perfection almost got me. The almond croissants had just the right amount of crispy crust on top and the lemongrass infused panna cotta was smooth as silk. The fancy hotel, a Potemkin village to which I had escaped to indulge in a sumptuous breakfast buffet alongside the blue-haired cruise-ship crowds, is by necessity a self-sufficient microcosm. Behind the scenes, a lot of people were hard at work keeping up appearances. 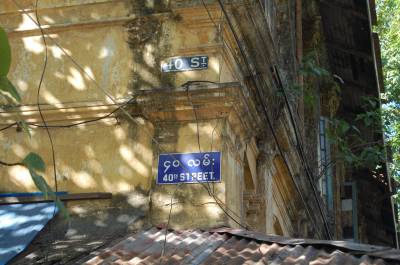 Still in the recovery phase after over 50 years of military dictatorship and colonial rule before that, Burma (Myanmar) is not the most practical of countries to live in. Any establishment or household needs to seek their own solutions to services that most people in developed countries take for granted. Power supply is sporadic despite the fact that electricity lines hang off buildings like tinsel on Christmas trees. Our Burmese friends had three of their own generators in the house, and colossal generators line the streets of Rangoon (Yangon). What’s more, each one is taking up an entire parking space, contributing to the already horrendous traffic chaos. 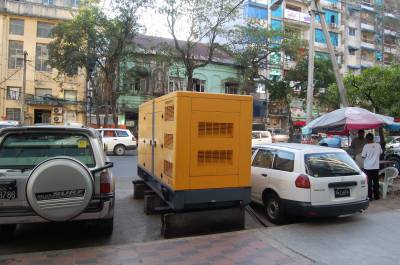 Pedestrians must also navigate the huge open gutters along the remarkably uneven sidewalks, while public water supply, rubbish collection and plumbing services are not always reliable. In addition, anyone who want to do any financial transactions needs to have a lot of US dollars in cash, as credit cards and ATMs are not always used or available. The check-in lines at the airport on departure were the slowest I have ever been in. A glimmer of hope were the, in my limited experience, surprisingly efficient telephone and wi-fi services. 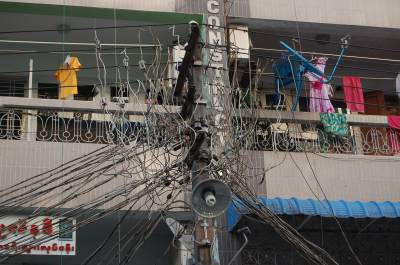 Basic services are far from the only challenge. There are long-standing religious and ethnic conflicts in the north of the country. Despite ceasefire agreements with rebel groups in several states, fighting continues in some areas and instigators are generally not held legally accountable. The military is reportedly actively abusing ethnic and religious minorities, through land grabbing, forced labor, and hindering humanitarian aid. A large proportion of Burma’s military and rebel movements are made up of child soldiers, many of recruited by simply being picked up on the streets of Rangoon. Even though it has likely reduced since 2002, when an estimated 20 percent of the army was made up of children, the situation still causes concern among the international human rights community.

Only five percent of the population is Muslim, yet many in the majority Buddhist population fear their influence in the country. The police turn a blind eye to violence by Buddhists against Muslims, whereas Muslim peace activists are reportedly being locked up. The president has said that he has no responsibility for the 800,000 strong Rohingya Muslim population due to their different ethnic origin, forcing 100,000 of them to live in IDP (internally displaced persons) camps. They, along with other Muslim minorities, continue to be denied citizenship and face other forms of discrimination. In addition to the IDPs, 1 million refugees from eastern Burma have fled the country since 1996. Half of the nearly 30,000 refugee children in the Mae Sot area in Thailand don’t attend school, making them vulnerable to abuse and exploitation.  In summary, human rights activists’ calls for civilian control of the military, an independent judiciary, and protection for ethnic and religious minorities all seem to be extremely relevant and urgent.

Needless to say, investment in this market is not for the faint-hearted, nor for those with shallow pockets. Just spending time in the country will set you back several hundred dollars per night as hotel room rates have tripled in price over the past two years.  Real estate prices are extremely high and very few buildings of decent quality are available on the market. The military also has a tight grip on economic development through its two holding companies, Union of Myanmar Economic Holdings (UMEH) and the Myanmar Economic Corporation (MEC). The business climate is very insecure to say the least. According to a recent World Bank report, Burma scored below South Sudan, Congo and Libya when it comes to ease of starting a business and enforcing contracts.  Lawmakers have recognized this issue with legislation being changed last March to strengthen investor protection and pave the way for foreign investment by addressing restrictions on foreign ownership and land leasing rules. Despite this, the country is still in the “extreme risk” category in a recent report by the global risk analysis firm Maplecroft.

Your occasional correspondent wrote almost a year ago about the reform process in Burma, but may have been slightly blinded by the budding reforms and the welcome release of democracy activist Aung San Suu Kyi from house arrest. It seemed like such a bold and powerful move, with great promise of reforms to come. But as the military rulers turned plain-clothes and let this ‘Mandelaesque’ woman onto the political stage – Aung San Suu Kyi became a member of parliament through a by-election in 2013 – what did they want to achieve? And what reforms are actually in the making? More on this next week!