Mind the communication gap: Do good and talk about it!

What is one of the essentials for a stable relationship? Trust! And what’s the killer for trust? Deceit! What’s true for human interactions is also true for relationships in the business world. The latest outrageous example of how so-called professionals capitalized on the confidence of their clients was the horse meat scandal, mainly affecting the European continent. The whole food sector is going through a crisis of confidence. Not for the first time though. We had BSE, moldy meat being labeled as fresh, too much antibiotics in turkey and so on. It’s not just Europe. China was just hit by its own meat scandal: Foxes and rats were sold as lamb, some meat was even poisoned. Such actions destroy consumers’ confidence instantly and always leave a sour taste.

So, criminal actions put the meat industry into a crisis, but consumers will gain trust again just by time passing and media coverage going down. Other industries, on the other hand, have a more general image problem as suggested by a recent Eurobarometer survey conducted in the EU, Croatia, Israel, Turkey, Brazil, the U.S., China and India. Finance and banking, mining, oil and gas companies are the least likely to be seen as making efforts to behave in a responsible way towards society. Only 34% of the respondents in Europe perceive them to be making efforts to do so. In comparison, 70% and 67% respectively of respondents thought that agricultural companies and retail companies/ supermarkets were making efforts to be responsible towards society.

The numbers for the finance and banking sector are not a surprise, as they are still widely blamed for putting almost the whole world into economic crisis. In addition, their transactions do not appear to be transparent, while bankers’ remuneration seems to be unjust to a lot of citizens. Mining and oil business happens far away from peoples’ daily routine and probably brings up associations of big money and environmental issues – two parameters that may make their image suffer. So what? The companies concerned could now just shrug their shoulders and continue doing business as usual.

But as Stephen M. R. Covey (son of the late Stephen R. Covey, author of the 7 Habits of Highly Effective People) demonstrated in The Speed of Trust companies have an economic interest in consumers’ confidence: “When trust decreases: speed decreases and cost increases.  When trust is low, relationships suffer, production is sluggish, customer retention erodes, employee turnover increases, stocks plummet and the costs are enormous.” This long list of negative impacts corresponds with findings from the Eurobarometer survey. A vast number of consumers believe that they can influence the actions of companies through their purchasing decisions. In Europe 49% of respondents are most likely to think that citizens themselves should take the lead in influencing companies’ actions. In India it’s as high as 70%, in the U.S. 59%, and in Brazil 45%. In China people see more public authorities in charge (42%).

So how does mistrust grow? The Edelman Trust Barometer 2012 detected some big differences between consumers’ expectations and their evaluation of the performance of companies in respect of different trust building attributes. Here are just a few of the issues highlighted in the Edelman survey (numbers in %): 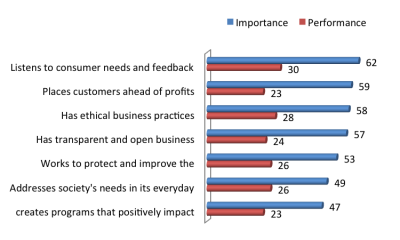 Understanding the causes of mistrust is one thing; what can companies do about it? First, let’s go back to Stephen Covey: “If you want to be trusted, be trustworthy.” But also talk about it! According to Eurobarometer 79% of all 32,000 respondents are interested in what companies do to behave in a responsible way, but only 36% say they feel informed in this area. Interestingly enough, people from India (69%), the U.S. (63%), and Brazil (57%) are more likely to feel informed about responsible actions than those in the EU (36%). Even so, there is clearly a huge communications gap to be closed. But how, and by whom?

Although every company will have to find it’s own individual way to address trust issues, it is worth looking at some communications best practices. Since 2009, the PWC Building Public Trust Awards has recognized organizations for their excellence in corporate reporting. They pick the winners from the FTSE 100, the FTSE 250, and the public sector. The categories are the following: tax reporting, people reporting, executive remuneration reporting and sustainability reporting. They also have one international award for excellence in integrated reporting. The winners have to prove that they provide “better – not more – information,” illustrate a linkage between the information provided and the stated strategy, offer quantified data to support their qualitative statements and, where appropriate, provide a statement of future ambition in the reporting.

But it’s not only about what is presented and how which leads to more trust. It’s also about who communicates. In many fields consumers are more likely to believe in information provided by employees instead of the leaders of a company. Also passionate or activist consumers seem to be a trusted source. Media spokespeople are far behind in the rankings. Back to the Edelman Trust Barometer:

Both, Stephen Covey, who is currently on his “Speed Of Trust Tour” in the U.S and the Edelman Trust Barometer come to the same conclusion: It’s the leaders in charge who change paradigms. Let’s close with Covey’s advice:

The Speed Of Trust
http://www.myspeedoftrust.com/