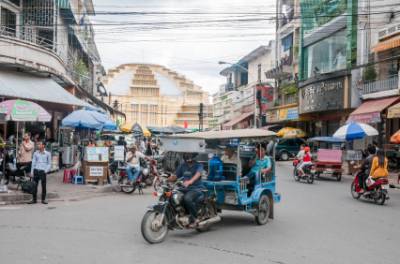 Your occasional correspondent is tuktuking south on Chamkardoung boulevard on a steamy hot October day. Red dust and nauseating diesel fumes fill my lungs and eyes as we approach the infamous Khmer Rouge killing field outside Phnom Penh. The nausea is exacerbated by seeing the physical remnants and listening to vivid accounts of a horrendous time in Cambodia’s history in what is nowadays an open air museum.  Historical images of forced labor and starvation in the rice paddies, torture and execution in the killing fields fill my head. Later, returning northwards, zigzagging through the sprawling urban landscape, history fades and today’s reality grabs my attention and fills me with a glimmer of hope. The small independent businesses along the road are seemingly thriving: bakeries, furniture-, hardware- and appliance-stores, delivery companies, the larger beer breweries and garment industries. Only a few decades after Pol Pot and his regime were forced out of power in 1979, Phnom Penh has gone from ghost-town to this dynamic hustle and bustle. 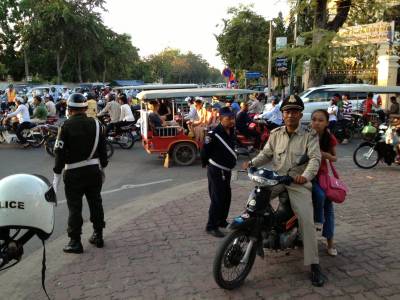 Cambodia’s strong economic development since 2000 has been spearheaded by the garment, tourism and construction industries. Foreign investment is encouraged by the government through low minimum wages and tax rates as well as few market restrictions for foreign companies, e.g. wholly foreign-owned companies are allowed to operate and long-term, extendable land-leases may be granted. As wages rise in China, the manufacturing industry is starting to turn to Cambodia for cheap, low-skilled labor, although the minimum wage has come under scrutiny lately, for example in Sweden, where the budget clothes giant H&M was criticized for allowing their contractors to pay a salary insufficient to survive on. The healthcare industry, insurance companies, telecom providers and various franchise establishments are also taking an interest in Cambodia as an emerging market. But in order to sustain the current economic growth rate, a healthy level of disposable income among the middle class, which forms the backbone of the economy, has to be maintained.

Being middle class is defined by The Economist as having a fair amount of income left after one has paid for basic food and housing. In Cambodia, these people are not those with a university degree and a secure job market in the private or public sector. Rather, today’s middle class is made up of small business owners, hardworking entrepreneurs and their associates. It is therefore essentially an economic middle class, rather than an educated one. The mind boggles when one considers the story behind this – 80 percent of teachers and 95 percent of doctors perished in the genocide of the 1970s. Their children would have made up a large chunk of today’s middle class, had they been allowed to be born and raised under different circumstances.

Does this mean that the Khmer Rouge succeeded in their class war – reversing traditional social roles by killing the intelligentsia and allowing the poor and less educated to get ahead? According to a missionary who works with schools in the Siem Riep area, rural teachers’ salaries in the north amount to 30-40 US dollars per month, which is not enough to sustain a family. Our tuktuk driver of peasant descent explained that even though his family also had to live through the horrors of the Pol Pot regime, they were already poor and living in the countryside so were not the main target for persecution. Therefore they came away from the ordeal relatively unscathed, and were able to rebuild their lives after the Khmer Rouge were gone. He now earns more than a teacher. Another representative of the rising middle class is different driver, this time of a more up-market limousine company. He believes that hard work and a good education is the key to the future, for each individual and for society as a whole. Despite growing up in the countryside, he was fortunate to get a decent education, and most of all, he learned English. This has meant that he can work in one of the country’s booming industries – tourism – and provide for and educate his four children. His interest in his children’s education is promising for the future.

So the economy is growing and with it the middle class, but the overall picture is far from rosy. For example, literacy levels are comparatively low, with only 20 percent of men and just over 11 percent of women having completed secondary school. What’s more, the current enrollment (2010) is still well under 50% for both sexes, compared to an average 80% in neighboring countries. Moreover, around a third of Cambodia’s children are chronically malnourished and a quarter live in poverty. These challenges are reflected in the country’s HDI (Human Development Index) score of 139 out of 187 countries, placing it in the lowest bracket of “medium human development” countries. Cambodia’s women also lag behind, not only in education, but also in participation in the workforce and political life. Eighty percent of the population still live in the countryside and are mainly dependent on agriculture for their survival. In summary: inequality, poverty and low education levels prevail. Not normally a recipe for sustainable development – neither economic, nor human.

A local shop-owner that I met in the southern Kampot province agreed with the education variable, and added another one – a general lack of trust in society. But what is the root cause of these problems? The Kampot shop-owner believes both the lack of trust and the low education levels are lingering problems from the Khmer Rouge years. The combination of the two may feed the most serious challenge of all: corruption. According to a senior European development worker in Phnom Penh, corruption is the single most important obstacle to Cambodia’s development. And he is not alone. In Transparency International’s corruption perception index 2011, Cambodia ranked 164 out of 182 countries, lower than countries like Nigeria, Papua New Guinea and Zimbabwe.

The road travelled by Cambodia over the past three decades is, thankfully, of the less travelled variety. The progress from the genocidal madness that ended in 1979, to the economic development of the last few years is quite remarkable. Even though inequalities persist, if the middle class – of whatever lineage – continues to rise, there may well be light at the end of the tunnel.

“The signs are good for further growth in Cambodia garment industry”
http://www.etmcambodia.com/viewarticles.php?articlesid=29