Tracey is a Director of Strategy Dynamics Global SA. She has over twenty years of experience as a consultant and executive, focused on complex strategy and organisational issues, and has worked with leading companies globally. Prior to founding Strategy Dynamics Global SA, Tracey worked with senior executives at IMD, and has held senior roles at the BBC, Booz &Co., Deloitte & Touche and Braxton Associates, as well as being an active advisor to a number of start-ups. Tracey is a Fulbright Scholar and holds an MBA from The Wharton School, University of Pennsylvania where she was distinguished as a Palmer Scholar.
Power to the people: The future is distributed energy
30th April 2012 by Tracey Keys in Blog

Continue
0 Comments
Power to the people: The future is distributed energy
30th April 2012 by Tracey Keys in Blog

April 2012: The weather seems to be going crazy across the globe, with man-made climate change seen by many as an important contributing factor.  Preliminary findings from the World Meteorological Organization (WMO) confirmed that 2011 was the warmest year on record. Globally-averaged temperatures in 2011 were estimated to be 0.40°C above the 1961-1990 annual average of 14°C (Source: WMO). In many parts of the world people have had to deal with unusual extreme weather events from devastating flooding to extreme drought and freezing temperatures. Such climatic shifts have a significant impact on energy, water and food security in a world where demand for all these critical elements is rising due to both population increases and rising per capita consumption. Vulnerability is increasing.  As a result, energy, water and food security are top priorities for the world’s leaders along with all those directly and indirectly impacted, i.e. everyone on the planet. As resource pressures increase, the challenges will be to do more with less, to eliminate waste and, ultimately, to develop self-sustaining systems that will allow us to find the balance where resources are no longer depleted but reused effectively.

To achieve the security we need, new technologies will be critical from urban farming to seaweed or algae-based biofuels. However, more important – and more difficult – will be rethinking our entire relationship with energy, water and food as this is the key to future resource security.  It means potentially using less of each resource – or using it better, for example through distributed production which eliminates the waste of transmission or transportation.  It also means being open to novel sources of the resources we need, for example of new, healthier foods in our diets from currently unused vegetables to artificial meat to insects.

How the future of energy, water and food security will evolve is yet to become clear, but what is already certain is that if we do not act now, the potential for resource conflicts between countries, organizations and people will rise as a recent US Intelligence report highlights (see Water below).  Even in the next two decades our resource consumption patterns are likely to be radically different and diverse – and these developments might even be exciting and interesting!   What is your organization doing to tackle the challenges? 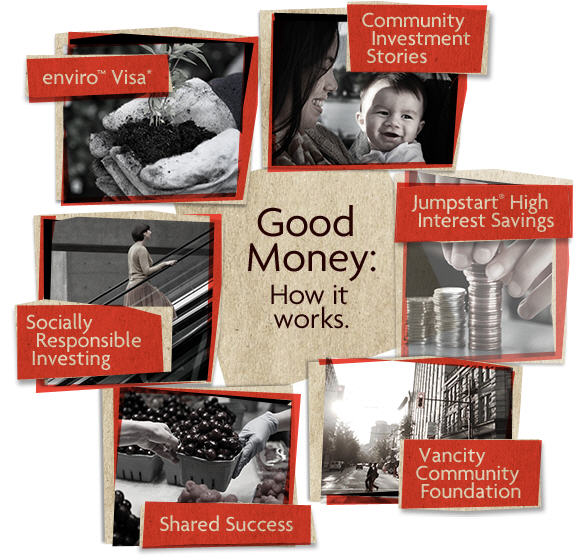 When we heard from Lory Block about how she and Vancity’s Executive Team were using Global Trends recently, the thing that made us really sit up was her description of Vancity’s vision: “Our vision is to redefine wealth.”

Redefine wealth? Vancity celebrated its 65th anniversary in 2011, along with its best ever financial results.  As the largest credit union in Canada, it offers financial services to around 480,000 members who have entrusted the organization with C$16.1 billion of their assets.  So how can a financial services institution, which is in the business of making profits, be purpose-led? In a depressed economic climate, where bankers have been widely criticised for their role in the financial crisis and detachment from the challenging everyday reality of people trying to survive against a background of unemployment and debt pressures, what makes Vancity unique?

We called Lory to find out.

March 2012: Technological advances are moving at exponential rates.  Ponder this for a moment:  your parents have lived through the development of the computing era from the earliest electromechanical devices in the 1940s to IBM’s supercomputer Watson that outperformed the best human brains.  Today, many five year olds have no concept of a world without technology – it is quite simply part of their lives.  This month, we’d decided to look ahead – a long way ahead in some cases – at radical and innovative technologies that will potentially reshape our world in the decades to come.  In today’s world, it’s easy to get swamped by short-term thinking and firefighting but we don’t like to encourage it…

Technology advances will not only impact how we work and live, but also humans as a species. From developments that allow us to overcome the resource challenges presented by population growth to advances that will reshape the production of goods and services, our environment and our humanity, technology will challenge us to rethink every aspect of what we do and how we do it.  While some of the breakthroughs will be exciting and easy to embrace, others will challenge vested interests and the status quo.  The definition of value will be challenged and change.  Our comfort zones will be disrupted and pressures could easily spill over into social, political and business tensions or conflicts.  But, like it or not, these changes will come – sooner than we think in some cases.  What is your organization doing to get ready?  Who do you need to partner with to do so?  What will be the impact on your customers and consumers more broadly? What are YOU doing?

Continue
0 Comments
GT Briefing February 2012: The Fight to Own the Consumer
9th February 2012 by Tracey Keys in Monthly Briefings

February 2012:  With more consumers globally with more affluence, choice and desire to get involved in co-creation through the business system, the race is on to own the consumer. Businesses are leveraging their extended networks along with technology and the exploding number of channels available to connect with the consumer to build reputations, trust, loyalty, returns, market position and ultimately the license to compete. The competitive advantage of companies on the frontline of consumer interactions is being challenged by those one or more steps removed, as they seek to leapfrog retail channels, e.g. through direct online sales, or to build reputations that mean consumers demand their product or service as part of the solution, e.g. Intel Inside. As consumers increasingly demand experiences and solutions and become more socially aware, the notion of value is shifting, potentially demanding new forms of cooperation between firms and consumers.

In this briefing, we look at how this fight to own the consumer is playing out in practice, through the eyes of the consumer and the networks to which they are increasingly connected. On the other side of the equation we look at how businesses are becoming more networked and social – mirroring in many ways their target markets.