February 2015: Demand for many resources already exceeds what the planet can supply. A rapidly growing global population and rising incomes in many parts of the world means more people, consuming more resources: Food, water, and energy, as well as goods and services. Already we are well past the point where the Earth can replenish the resources we consume and if current consumption trends continue, by the mid-2030s analysts suggest the world’s population will demand twice as many resources as the planet can supply – risking disasters and conflicts as people and nations compete for ever scarcer resources.

Water is now being referred to as the “new oil.” Increased per capita use in rapidly developing economies (RDEs) and greater scarcity of freshwater worldwide, exacerbated by pollution and climate change, means individuals and businesses will need to reassess the value of what has been to date a “free” resource. There will likely be increased geopolitical tensions over control of water supplies, given that well over half the world’s countries share critical water resources with other nations. In this briefing we explore the challenges around increasing water scarcity as well as some innovative ways that these are being tackled.

Also see our slideshow presentation of The Water Challenge

Living in a world of water insecurity

Water is crucial for all aspects of life, but fresh, accessible water is a scarce and unevenly distributed resource that does not correspond well with patterns of human development. Due to demographic, economic, and social changes global freshwater consumption rose at twice the rate of population growth in the 20th century – today around 1.2 billion people live in areas considered to be water stressed and, by 2025, the UN estimates that 1.8 billion people will be living in severely water-stressed areas. 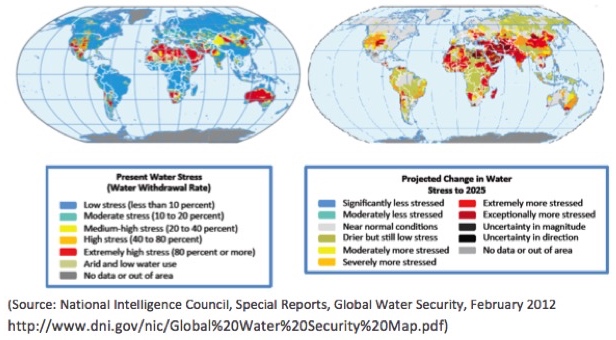 In water stressed areas, insecurity over access to safe drinking water and pollution are major issues. Conserve Energy Future has compiled a list of 40 troubling facts about water pollution, some of which are below. For the complete list, click here.

The impact of water stress and insecurity

From Africa to the Middle East and California, freshwater resources are drying up, leaving many millions of people without sufficient access to safe drinking water. Access to water is a serious threat to the world – think how water issues impact food production, energy supply, increased poverty, and escalating social tensions. According to the World Economic Forum Global Risks 2014 report, water insecurity is now one of the top 3 highest risks to global development, only outpaced by financial crises and climate change.

The political challenge – Raising the potential for conflict/war

Water is increasing becoming a competitive resource; according to The Pacific Institute, which studies the impact of water on global security, there has been a fourfold increase in violent confrontations over water within the last decade. Peter Gleick, president of the Pacific Institute believes “…the risk of conflict over water is growing – not shrinking – because of increased competition, because of bad management and, ultimately, because of the impacts of climate change.” (Source: The Guardian). Below are just some examples of such violent conflicts. Click here for a more complete list.

The lack of access to clean water is putting a strain on millions of already vulnerable people, in particular, in less developed countries. Co-founder of Water.org Matt Damon says, “Access to water isn’t an end in itself. Access to water is access to education, access to work, access – above all – to the kind of future we want for our own families, and all the members of our human family.” (Source: water.org)

As soon as 2030 global water demand could exceed supply by up to 40% if no action is taken to secure sufficient water supplies. The threat is real and smarter water management is necessary to sustain sufficient economic growth in the future. In 2011 Veolia Water released a report showing the pro and cons of “business as usual” and “sustainable” water management.

The environmental challenge – Increasing the threat to natural ecosystems

Protecting the environment means protecting the human race. However, despite greater environmental awareness some people still dispose of non-degradable rubbish such as furniture, metal, and plastic items in in the world’s natural waterways, ignoring the risk of contaminating water supplies and posing hazards for wildlife. The main threats to freshwater wildlife are habitat loss and fragmentation, pollution, and invasive species.

How the world is responding to the water challenge through innovation

Water is a shared responsibility between societies, governments, businesses, individuals and other stakeholders but the implications of our current and future water challenges seem, from time to time, quite overwhelming. The water quantity challenge, in addition to the water quality challenge posed by increasing threats from wastewater, will demand significant shifts in global attitudes to water from all these players, in terms of usage, pricing and ways of living and operating. In parts of China, just one example amongst many countries, incidents of pollution and shortages of supply have paralyzed business operations. This disrupts global value chains, putting pressure on business and corporate reputations, even if regulatory requirements have been met. It’s time to go beyond compliance to develop radical new approaches to agriculture, water recycling, infrastructure, industrial processes, and wastewater management – and consumption habits of individuals – to ensure sufficient quality and quantity of future water supplies. The vital nature of water, a resource which is often viewed as free, will increasingly confer political and economic power on those who have and/or control access to supplies, as well as those nations and organizations who are most efficient and effective in water usage.

Corporations in a SmartWater world

Working together to make a difference

Give us your opinion on water scarcity! Take our 2 minute survey at  https://www.surveymonkey.com/s/GTwater210115

In March: Look out for trends in action on Upstarts: Driving the entrepreneurial economy