Burma part 2: THE POWER, THE LADY AND CAUSES FOR HOPE

It is a well-guarded compound with a high, whitewashed wall facing the street. Access is restricted to a solid, metal-framed sliding gate, and only a small peephole allows the guards a view of the entrance on University Avenue Road. Your occasional correspondent is standing outside Aung San Suu Kyi’s house on the shores of Inya lake in northern Rangoon, not really sure what to do there. There is nothing to see and the car is waiting for me on a narrow curb in the late afternoon rush hour traffic. I am thinking it’s probably time for dinner. 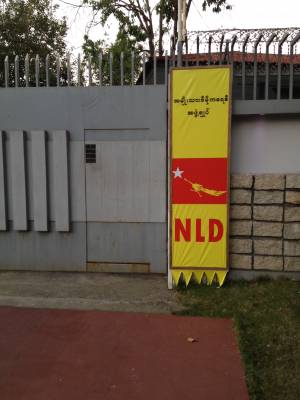 For me, along with most of the Western world, Ms Suu Kyi – “the Lady” – epitomizes the hope for a new Burma. The fact that she is now a member of parliament is a huge step in the right direction, even though she obviously still operates under the watchful eye of the regime. During her decades of house arrest, the junta took little notice of calls for her release and for political and economic reform. So why is Burma joining the ranks of ‘authoritarian-regimes-for-reform’ at this particular point in time?

Some experts claim that economic concerns triggered the reform process: the need to end international sanctions and the fear of China’s increasing dominance over Burma’s economy. According to long-time Burma observer Bertil Lintner, the current reform agenda is being staged by former president and military strongman Than Shwe, with a view to maintaining the status quo, rather than to achieve reform. (All power centers except the parliament, where some dissent is tolerated, are allegedly under the de facto control of Than Shwe; the current president Thein Sein, a former general and prime minister of the military regime, is considered his puppet.)  There are fears among observers that Aung San Suu Kyi is being used as a pawn in a high stakes game, both by foreign powers with an interest in Burma’s geopolitical influence, and the Burmese government wanting to make itself popular to stay in power. Ms Suu Kyi must walk the tightrope: supporting the regime and its reform agenda so that she will be allowed to continue her new political life in freedom, but not to such an extent that she will alienate her supporters.

Regardless of what goes on behind the scenes, some important reforms are indeed underway. Parliamentary elections are planned for 2015. However, for these to be considered democratic, the 2008 constitution needs to be changed on at least two counts; first allowing Aung San Suu Kyi to run for office, despite the fact that her children are foreign citizens, and second, removing the stipulation that the army will hold 25 percent of parliamentary seats. President Thein Sein said on January 2 that it would be “healthy” to revise the constitution and that it should not prevent any citizen from becoming the leader of the country. (His statement was prompted by a proposal for changes to the constitution by lawmakers with strong ties to the former military regime, to the effect that Ms Suu Kyi could not run for president unless her sons gave up their British citizenship.) However, more than 75 percent of the members of parliament have to be in favor of constitutional change, which gives the army – with its mandatory 25 percent seat allocation – an effective veto.  Finally, if Thein Sein is indeed a puppet with little influence over parliament, the outcome of such a vote is anyone’s guess. 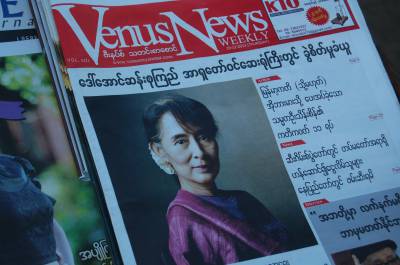 A tangible, welcome and already implemented reform is the 2012 abolition of pre-publication censorship of the press, as is the state media monopoly’s official end in April 2013. Even though self-censorship among journalists remains to some extent, the increased press freedom is almost visible in the overloaded tables of newspaper vendors in the streets of Rangoon. A surprising number of newspapers have been established since the reform process began. One possible explanation for the journalistic maturity in a country which has not had a free press for decades is that formerly exiled media organizations have now established themselves on home-soil and been able to hit the ground running, e.g. Democratic Voice of Burma, Irrawaddy and Mizzima.

Another sign of openness by the regime is the stream of foreign advisors, consultants and aid organizations being invited to help the government overcome the massive challenges ahead. In fact, when browsing a local business magazine, more than half of the articles were about development assistance, grants, loans and other foreign donor funding rather than anything related to traditional business news. One can only hope that the top-tier’s apparent willingness to change will trickle down to lower levels of bureaucracy, in order for new laws and regulations to actually be implemented.

An event celebrating the new openness, the December 2013 27th South East Asian games, were commonly referred to as Myanmar’s coming-out party in international media. All of South East Asia was watching as Burma came in as a third overall in the medal tally, beaten only by Thailand and Vietnam. It was a huge confidence boost for people I spoke to in Rangoon and most likely a triumph too for the government. 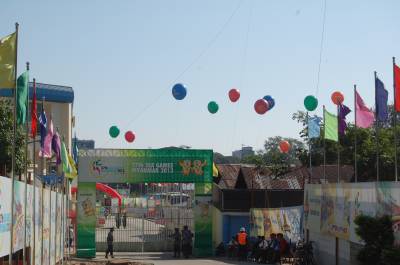 The SEA games also served as a dress rehearsal for the inevitable future tourism boom. It will require a great deal of investment in infrastructure, political stability, education and a genuine commitment to reform, but it is sure to happen eventually. Despite the fact that most travellers I have talked to spend most of their time outside Rangoon, in the ancient capital of Mandalay or the temple ruins of Bagan, the main city is home to beautifully dilapidated colonial buildings, including a train station, the largest cathedral in South East Asia, and whole blocks of red-brick former colonial administration buildings. In summary, the beaches are there, the culture, the people, the food, the nature – everything a tourist could ask for. According to an official estimate quoted in the Economist, the hotel and catering industry alone has the potential to create over half a million jobs in Burma by 2020. To explore these opportunities further, it may be a good idea to visit the Myanmar Hospitality & Tourism Conference in Rangoon in February (http://mhtc.sphereconferences.com/). 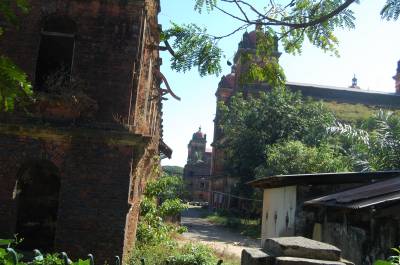 Now is certainly the time to see this budding tourist destination! If you go, make sure you have a peak through the back door of your hotel, support small local businesses, read the newspapers, walk the streets of Rangoon’s Chinatown at night and visit the lesser known temples around the country. And last but not least, when in Rangoon, stand still for a moment in front of the gates of Aung San Suu Kyi’s house and take comfort in knowing that she probably isn’t home, unless she is taking a break from her work in parliament.

For further reading on this topic, please have a look at these links: