Social media and Brand Reputation in the Financial Services Sector 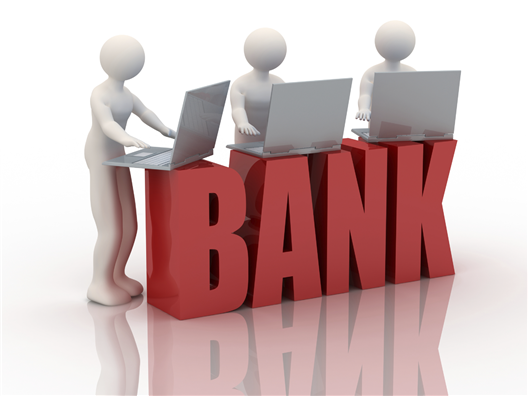 Ignoring the power of online word-of-mouth, or word-of-mouse as I like to call it, is no longer an option in today’s interconnected world.  Nor is it reflective of what professionals in the financial services industry are being asked to deliver by their C-Suites post 2008.  The ability of consumers to influence corporate behavior and impact business planning in unanticipated and, at times, unwelcome ways has grown exponentially.  One ‘entertaining’ complaint from an irate customer going viral can escalate into a full-blown crisis in less than 24 hours.  In this environment, understanding what customers feel, think and say about your company – in real time – is ever more critical.

Many corporations have discovered social media offers a new way of creating value and mutual benefit for the companies and customers.  Take the case of Groupon who offer product vouchers to their customers in return for these individuals sharing their product experiences to their social networks.  By engaging customers directly and incentivising them to sell the product, Groupon demonstrates a new way of selling that exploits the values inherent in social media networks. In the financial services sector, many retail banks use Facebook, Twitter, LinkedIn, Flickr and mobile applications, as well as social media tools on their own websites.  In fact, Deutsche Bank, Crédit Agricole, BNP Paribas and Crédit Suisse employ a strategic approach[1} led by an in-house communications team.

40% of the banks use some type of social media (e.g. blogs, podcast or video casts, social bookmarking etc.) on their own website.

Today, many companies seek to invest in their future by realizing the potential of social media. Where there is opportunity, however, often the other side of the coin is present as well: risk.  And, in today’s world, the latter requires attention.  In fact, according to the Economist Intelligence Unit[2], one of the most significant and delicate tasks facing corporations (added) in the 21st century is protecting their reputation.

Consumer-facing companies are rightly sensitive to brand stewardship and aware of how easy it is for an organization’s reputation, and its brand, to become tarnished or negatively associated with a larger, industry-wide issue. Today, consumer generated media is rapidly becoming the “voice of the people” with an ability to impact corporations’ bottom lines more significantly than ever before.  In a survey of attitudes to blogs, 77% of respondents cited regularly updated journals as a useful way of gaining insights into the products and services they might buy.”[3]

With information available at the speed of thought, getting out in front of potential issues before it’s too late for anything but damage control is crucial.  One needn’t look very far to find examples: A computer manufacturer and exploding laptops (Dell), a food manufacturer whose staff are filmed including rather disgusting things in their products (Domino’s), the uproar over the receptivity of the first iPhone in Twitter (Apple) or airlines/companies (Ryannair and United) who respond to unhappy customers by trading insults and fan the flames of a negative story.  Each of these started in the social media sphere.

Many of us share ideas and opinions freely on blogs and Wikipedia or by leaving a comment on innumerable websites in ways we couldn’t have imagined just a few years ago.  Reputation management in the financial services industry already faced significant challenges as a result of the growth of social media but the risks have been amplified by the 2008 banking crisis.  In the US and the UK, trust in banks dropped 39% and 20% respectively between 2007 and 2010[4].  In fact, a survey of social media usage by bank customers (Figure 1) demonstrates just how we use social media.  Respondents report posting both negative and positive comments, as well as reading the views of others.  The reality is it is simply no longer possible to ignore this phenomena and I would suggest, means proactivity is the prudent business choice. 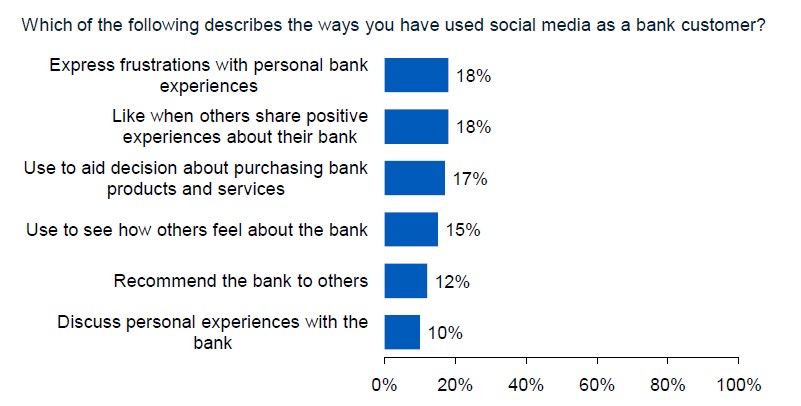 Risk Monitoring: The Effect of Word-of-Mouse on Reputation

Today, many of us identify the brands we want to do business with by looking to our peers.  In other words, if my friends trust or, even better, recommend a company, I will as well.

And yet, we have all heard the cautionary tales that spill over into viral crises.  Recently, a relationship manager, at a private bank, pitched their new concierge service to an extremely wealthy client.  The client owns an e-business with an enormous income.  In addition to his and his companies’ e-identities, he enjoyed a luxurious lifestyle and shared this with a large network of friends and peers.  Although this wealth care concierge service seemed to be a good match to his needs, the client was reluctant to sign up. The relationship manager came up with the following idea: the client had €30 million under management. If he increased this amount by €5 million, the bank would waive the wealth concierge fee.  Accepting the offer, the client agreed to the service and all went swimmingly until an incident with a Lamborghini in Saint-Tropez.

There are 500 million users on Facebook with 130 friends for an average user. According to the statistics, people spend 700 billion minutes per month on Facebook.

Arriving in the south of France, the client asked for his car to be delivered and so it was, along with an invoice for €5000.  When the private banker assessed the situation, he was confronted with a dilemma.  Waive the invoice and absorb the cost, as the concierge service was outsourced, or try to convince the client to pay.  Wrong choice you may observe and you’d be right…
One very unhappy client, sharing the incident with his friends and peers via online networks and suddenly you had a bank facing unwelcome publicity and a reputation dented.  Unfortunately, it did not end here.  In fact, this client, his friends and peers withdrew over €700 million in assets.
Warren Buffett famously said, “It takes 20 years to build a reputation and 5 minutes to ruin it.” In today’s world, the viral growth of information sharing through social media outlets can be extraordinary, as seen in Figure 2.  When the viral coefficient is greater than 1, as is the norm for social media, the results of an incident grow can grow exponentially.

Viral coefficient is the number of new users acquired for each of the existing users passing through the viral loop. It is used to measure popularity in social media. 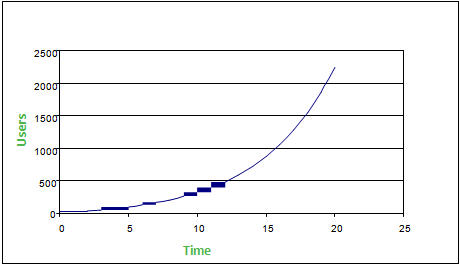 Informed Listening
Yet, listening to the myriad voices remains challenging. The sheer volume of content requires precision filtering and robust content sources which contain postings from the widest possible range of opinions, including consumers as a whole, customers, critics, government, regulators, NGO’s and other influencers. This requires highly sophisticated techniques that allow one to mine institutional and system knowledge – enabling the user to identify important messages and trends quickly.

70% of all blog and board postings are spam.

Harnessing the power of institutional and system knowledge

Institutional knowledge is the collective knowledge held within a corporation about brands, issues, talent, competitors and so on.  When cross-referenced with key words, opportunities and risks are illuminated as they appear in the blogosphere, on message boards or other social media outlets.

But what about the issues you cannot identify?  Institutional knowledge is essential but, by definition, it is gained through experience.  The reality is, if you are unaware of an issue, you simply cannot track it. Using system knowledge, one can analyze trends immediately enabling the identification of significant events in real time.

Many sectors recognize the potential value of engaging with social media.  The ever-growing influence of social media on consumer behavior presents companies with opportunities and risks while the massive amount of content enables the identification of previously unknown patterns, preferences and trends. To put it simply, using social media analytics to inform business strategy is just good business.  Sorting the wheat from the chaff, however, is no small task.

Jorge Yui is a senior managing consultant in the Strategy and Transformation Practice with IBM Global Business Services. He has participated in transformation projects in the Banking Industry in 17 Countries and in 4 Continents for over 20 years before joining IBM, where he now supports cross industry Clients in Geneva, Switzerland. Jorge can be reached at jorge.yui@ch.ibm.com

This paper uses our experience gained in client work at IBM, combined with secondary market research conducted in May 2011. We reviewed published articles, reports and papers to build up a picture of the opinion of subject matter experts from academia, business and industry analysts.