Giving It All Away: A Conversation with Dustin Byrne, CEO, Givmo 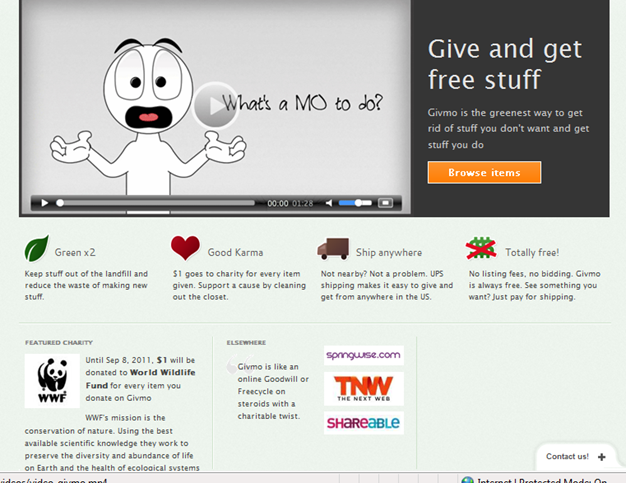 Givmo (http://www.givmo.com) is an intriguing start-up, with a business model built around the “freeconomy.” It focuses on helping you give away unwanted or unneeded items which may still have value to others.  Maybe you are moving house, or the children have gone to college and you don’t need the extra television, sofa, bookshelf, books… you name it.  With Givmo, it is easy to connect potential givers with potential receivers – no middleman, on which more below – and make the exchange person to person with no hassle.  The only cost for the receiver is a shipping fee which is generally below standard rates as Givmo has negotiated preferential rates.

Global Trends recently had the chance to speak with Dustin Byrne about the idea behind Givmo, and how this builds on global trends in terms of the changing notion of value and ownership, as well as the changing technology landscape.

GT: Where did the idea for Givmo come from?

Over the years I have moved around a lot and every time you move you always find things that you don’t need any longer or don’t want any longer. And like a lot of people it feels terrible and wasteful to throw away things that could still be useful. So that’s really where the idea started – and it’s one that resonates with many, many people. Obviously we realised that there were existing solutions, ways to donate goods. The issue though is that many charities only take specific types of items that are useful to them. So for example if you got an old VCR, where do you find a charity that will take that? There are commercial solutions for giving away unwanted items such as eBay, but these are very labor-intensive – you have to answer a lot of e-mails and talk to many strangers.  So none of the solutions are a really good experience and in the end of it’s not really about money – you want to get the things you don’t want into the hands of someone who does want or need them. So it did know we try to figure out a solution to get items from people who don’t want them to those people who value these items.

GT: From your perspective, what makes Givmo’s business model unique?  And why is appropriate for the world we live in today?

The biggest difference between Givmo and many other organisations is that there is no middle man. It’s a person to person transaction, with no one in between, so it is simpler and more straightforward. We also have the charity aspect where a dollar from every transaction goes to charity. The reason we introduced this is because we have a lot of people that they wanted some kind of benefit beyond just getting rid of an item – it goes back to the fact that people don’t feel good about getting rid of something that still has value. So now we have a double benefit for people who are giving the items – they are happy to get rid of the item, and happy that charities are benefiting the process. We select the charities based on how they fit with our business model and philosophy, for example organisations that have a fit with recycling and maximising value from unwanted items.

An Overview of Givmo’s Business Model 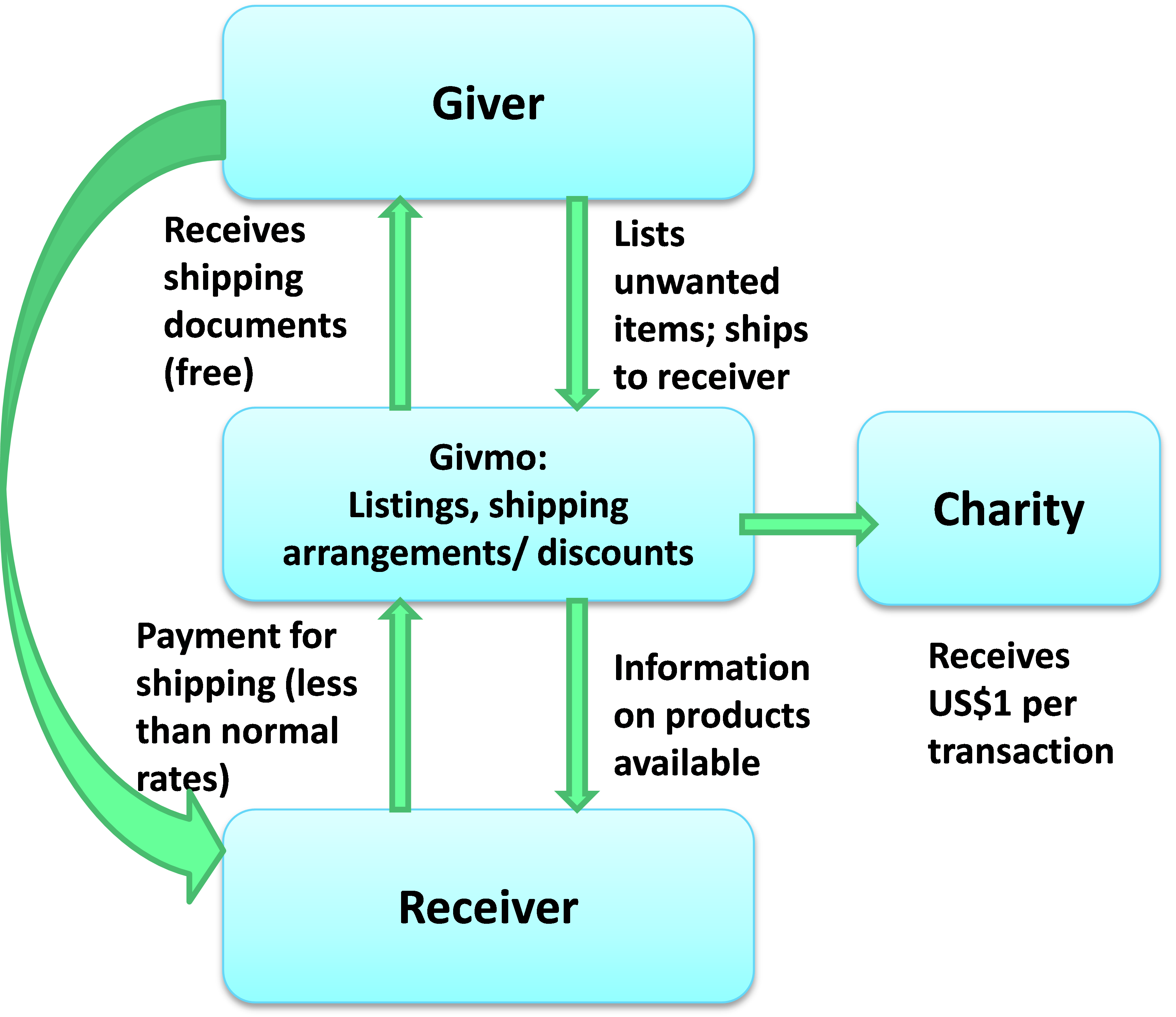 GT: Tell us a little more about your customers – what are they giving away?

At the moment we don’t collect a lot of data from our customers except the basic shipping details but they come from all parts of the country.  What they giving away is anything and everything that can be shipped. There is a huge range of different products and as yet we are not seeing any particular types of goods or segments which are most popular.

GT: We are seeing a resurgence of “old” business models from bartering to swapping to renting, which are changing the way we think about ownership and value – how do you see the notion of ownership changing looking forward?

The changing view of ownership is a trend in a lot of areas of business and life, but from my perspective it is not yet clear how this trend will continue and evolve – it’s up in the air. It makes sense for a lot of services like car renting, or travel, for example using Couchsurfing or Airbnb.  However, at some point people are going to try to apply new models of ownership to the wrong sort of areas, where it won’t work and then we will see more about how the trend play out.

GT: It’s a tough economic climate – with high unemployment and sluggish growth – how is this changing the way people use Givmo?  Are they more inclined to give away more – or less?

Yes, the economic climate is becoming more challenging and people are becoming more frugal. There are benefits to the move towards frugality for Givmo as it encourages more people to use our service because we can offer a very low cost solution – essentially just the shipping cost – to find the items that they need.  So this helps us to increase the number of receivers. However the downside is that as people become more worried about their jobs, about the economic climate or about debts they may not be so willing to give items away, holding onto them for longer and maximising the value from them.  As yet though, we are not seeing a significant impact from this.

GT: Looking ahead, how do you see Givmo growing?

What we want to do is get the business right in the US first – we launched in March 2011 and so are still in the process of building the business, although we are getting a pretty good reception.  We do have a lot of interest from many people in other countries, but it is tough to build an international model for this business because of shipping costs. For example you can’t ship a piano from Japan to Europe or the US because the costs don’t make sense. But once we have the model well established in the US, we are interested in looking at other discrete parts of the world where the shipping costs make sense, for example within a country or a group of close countries. And we are very open to partnering with other people and organisations to make the concept more available internationally.

GT: If you were to think about some of the major trends impacting the world today, what do you see as the greatest opportunities and challenges?

My background is as a software engineer – so I have a thing for the Internet, which made a huge impression on me as I was going through college. We hit a bump in the road in the way we were using Internet when the first dot-com bubble and crash happened in 2000/2001, and did not develop the opportunities it offered as much as we could have done. Even now I believe that the intranet as a communications medium is only perhaps 10% exploited – there are huge opportunities for enhancing the way we communicate and use technology in the future. The solutions we can build through the internet allow us to leverage the fact that the internet has connected every person to every other person in the world, eliminating the middlemen. This elimination of third parties will impact whole industries and is already starting to do so, as you can talk to people directly, you can negotiate with them directly and then make a deal with them directly. It changes the whole nature of the transaction and relationship.

In terms of challenges it’s always tough to get people to try new things.  Any time you start something new you will find a group of people who say “that’s crazy!” even if in the end many people come around to the idea. I’m not sure if it’s an inevitable part of human nature, but it is certainly a challenge.

Another challenge relates to eliminating the middlemen by using Internet and computing advances. The danger in this is that you also eliminate jobs by taking out one, two or three people in the middle. As computers take on more work, there is potentially less work for humans to do. We are in a transition period where more and more work is being pushed to machines. While this may mean less work for humans, it may also mean new types of jobs in the future because there are lots of areas where humans can create value much better than machines can. It may also even mean a better work-life balance for many.  Given the transition we are in, my advice for young people concerned about the future and where to find jobs would be to learn how to program. Computers are going to be an integral part of any industry and any job, so the more young people know about them the better off they will be. For example in software engineering, there are currently many jobs available but not the people to fill the posts. Ultimately, computers and the internet will help to redefine the future landscape of what we do, where and how we work, and how we live.