The Influence Landscape: The Evolving Power of Shapers & Influencers

Beyond Philanthropy and Propaganda: Making the Most of Corporate Social Responsibility
10 September 2009
Welcome to the Global Trends Blog!
20 September 2010
4th July 2010 by Administrator in Shapers and Influencers

Type the word “influence” into Google and it returns 142 million results.  What is going on?  The last two decades have seen major changes in the world which have reshaped the influence landscape – with power shifting away from position and traditional measures of status towards a much more fluid, fickle and democratic power structure.  Today it is about the power of “me” and “we” more than the power of “they.”  In this article we explore the emerging influence landscape and some of its potential implications.

Essentially influence is about power, the ability to shift the actions, attitudes and behaviors of others, to be a compelling force leading the way towards a goal, an aspiration or a way of living or working.

Even as recently as twenty or thirty years ago, the people with influence were relatively easy to spot: the President or Prime Minister of a nation, religious leaders, CEOs, and probably your parents.  Their influence was based on a combination of position, experience, knowledge, wealth – and most importantly control of the (limited) channels of communication to the “people,” for to have power influence must be spread. No longer – the influence landscape has already shifted dramatically and will continue to evolve.

The Emancipation of Influence

The last twenty years have seen unprecedented shifts in the influence landscape – a new emancipation.  People worldwide have seen their ability to make choices increase beyond imagination, while communications technology advances have driven an explosion of communications channels.

Increasing democratization of societies has increased the power of the individual to make their own decisions and to join an expanding range of “communities of choice,” across national boundaries and in both physical and virtual worlds.  At the same time, the growth of the internet and mobile communications along with the rise of many networks and aggregators has allowed individuals and groups to expand their “reach” exponentially.   As people find their voices and exchange ideas, knowledge and experiences, trust in the “old” bastions of power, whether governments, religions, or businesses is falling.  This has not been helped by a continuing stream of scandals, frauds and abuses of privileged positions amongst the traditional bases of power and influence.

Today, the influence landscape is an intriguing mix of the power of “me,” “we,” and “they.” The contours of influence are shifting rapidly as new individuals and groups rise to prominence while others see their power decline. But it is a two-way street.  Even as people are influenced, so they are increasingly able to become influencers, driving new forms of society and business in the process.  Communities of choice, including social networks and buying groups, are changing the rules of engagement by which we live and operate.  New behaviors and social norms are emerging from social networks, for example governing the personal information we share with others and how we interact.  Buying groups are tapping into the size of crowds to achieve new levels of price negotiation with large (and small) business organizations.  Reputations are made and destroyed in minutes worldwide as news flows through an ever expanding range of channels.

There are many excellent lists and articles which suggest who are the key shapers and influencers in the world today, including the Thinkers 50 (www.thinkers50.com), the annual Time 100 list of the most influential people in the world (www.time.com), and the Fortune list of the world’s most admired companies.  These shapers and influencers include political and religious leaders, entertainment and media personalities, business leaders, financial power brokers, scientists and academics and leaders of not-for-profit organizations.  To these we would add social networks, which over the last decade have become increasingly influential, and consumers/individuals.  These different groups and key players are analyzed in more detail in our Trend Reports (www.globaltrends.com).

However, identifying who are the shapers and influencers is just the start of mapping the influence landscape.  There are three other key elements to understand: the organizations and communities, which interact with the shapers and influencers to determine the rules of engagement, the networks, channels and aggregators through which influence travels, and the individuals and their roles who are shaped by influence. The map below offers an overview of how these different constituencies interact (Note members will be able to access an A3 poster version of this map in our Reports section). 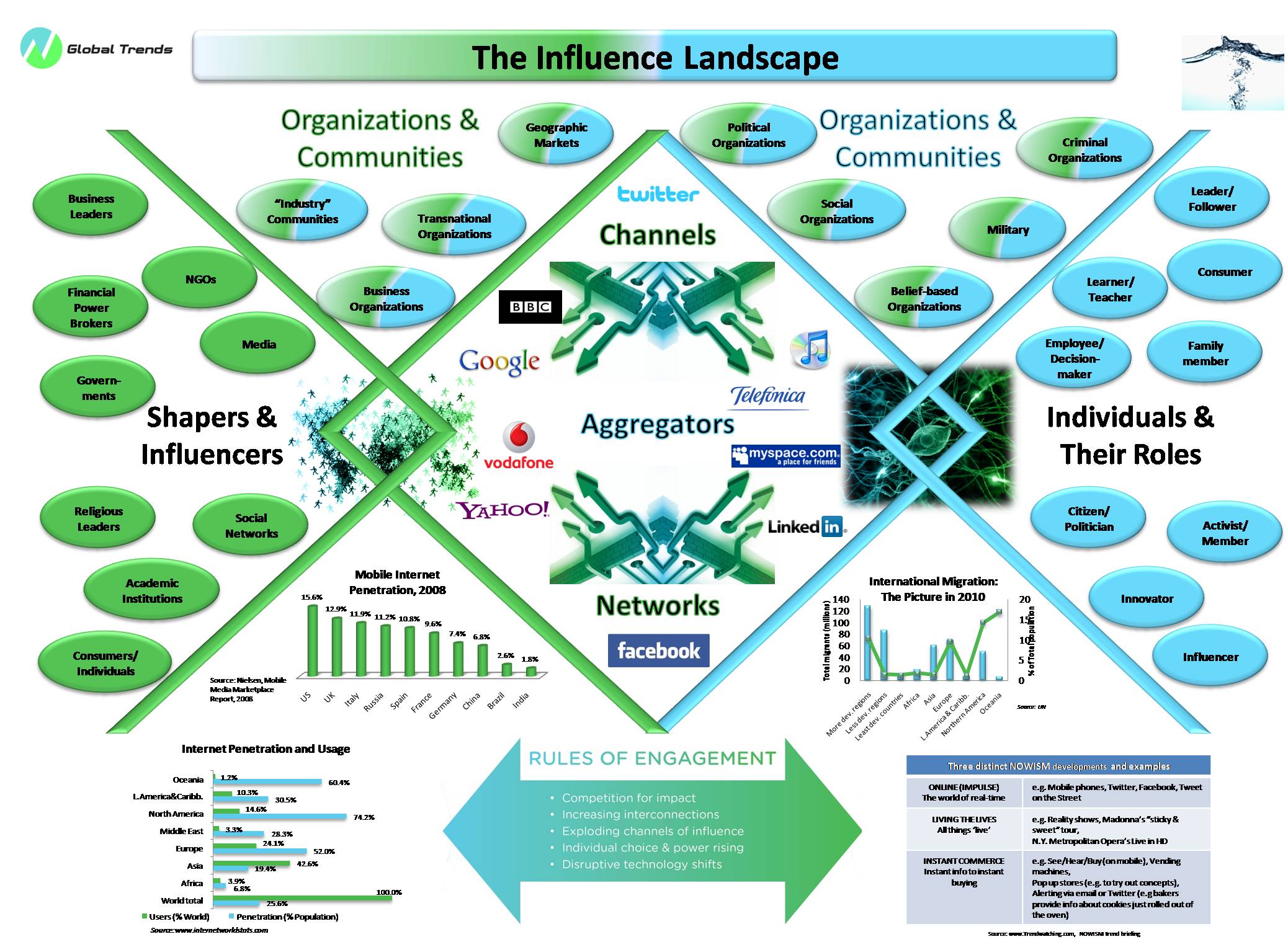 The Dynamics of Influence

This map offers a snapshot of the emerging influence landscape and the key players within it.  This is a foundation from which we can start to see how influence flows through the landscape: Where it originates, how it is amplified through the many networks, channels and aggregators and how it shapes the many possible roles of individuals, as well as organizations and communities.  It is these dynamics which determine how relative power is shifting among the different constituencies, and how behaviors and actions may change – which provides businesses and individuals with opportunities and challenges.

Let’s take a recent example of the US Presidential election in 2008.  Barack Obama’s election team wanted to reach out to multiple communities, with his message of change.  Some of these communities, including ethnic minorities and the young, typically demonstrated low voter turnouts and were hard to engage in the political process. Rather than just use the traditional mass media communication channels (television, radio, billboards and so on), Obama’s team actively sought to use digital channels and networks to carry their message of change.  They created communities online to mobilize fundraising and support; they used social media to deliver campaign messages in formats which appealed to their target audiences; and they turned the typical one-way election broadcast into a personalized two-way dialog with potential voters.   In doing so they radically changed the rules of engagement for political elections in future.

At the heart of the shifts in influence and how these are amplified are digital and mobile technologies and the organizations that control the channels, aggregators and networks.  These are the “pipes” through which influence bubbles and flows – and the gatekeepers which can promote or detract from the influencers.  Managing relationships with these gatekeepers is a critical task for any organization or person that seeks to influence others.

The other critical influence dynamic is around how individuals choose to exercise the increasing number of choices available to them.  Many businesses are now actively rethinking their marketing and advertising strategies to build and leverage relationships with their target customers and consumers.  These relationships go beyond simply selling products and services, to co-creating experiences with customers and consumers. For example at the Lego Factory, consumers can design their own custom Lego model and then purchase all the components needed to build it.

Underpinning these shifts is an improving ability to measure the dynamics of influence, including:

The advantage of such information is that businesses can see dynamics shift in real-time in many cases, and track influence as it moves through the landscape.  The challenge of course is that the transparency which these channels create needs to be actively managed, as the rapid movement of influence can impact reputations both positively and negatively.   For example, think of products which have been endorsed by a “star” whose influence suddenly wanes or becomes negative due to a scandal.

Making Sense of the Influence Landscape: Implications for Business

Understanding the landscape of influence and its shifting power structures is critical for businesses today and will become more so in future.  There are four key reasons:

Businesses that actively understand and manage influence have tremendous opportunities to, for example to:

The influence landscape is dynamic.  The one certainty is that it will continue to shift more rapidly, raising the question of what’s next?  How will power bases shift if we learn to manage the landscape and its underlying technologies better?  Who will be the next generation of shapers and influencers – and how do we connect with them?

These are questions we will be investigating over time, but welcome your thoughts, examples, suggestions and ideas, so please continue the conversation with us!

Tracey Keys is Director of Strategy Dynamics Global Limited and also works with the International Institute for Management Development (IMD), in Lausanne, Switzerland, where Thomas Malnight is a professor of strategy and general management.

©Tracey Keys and Thomas W. Malnight.  All rights reserved.  Not to be used or reproduced without permission.